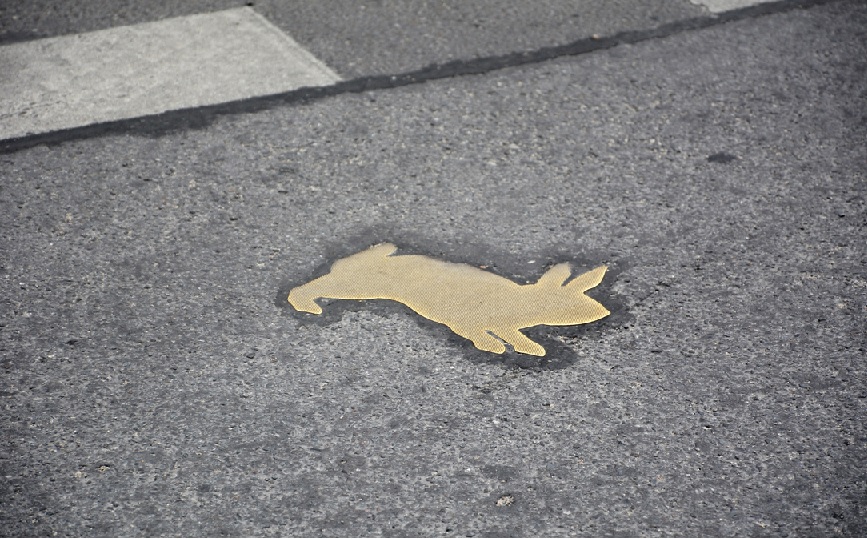 “Running, crouching, hopping – 120 silhouettes in the form of life-size inlaid rabbits dot the area once occupied by the former Chausseestrasse border crossing in the Wedding borough,  a memory of the peaceful inhabitants of the former “no man’s land” who served back then as an object of protection for people on both sides of the Wall” (www.berlin.de)

“At first glance there’s not much to see here aside from the usual Berliner Tristesse.  A gas station, a busy road and a massive construction site. But on closer inspection – the secret of the Chauseestraße unravels. A thin brick line crosses through the street – the memorial of where the Berlin Wall once stood. The brass Rabbits – better known by its official name “Kaninchenfeld” was a project by the Berliner Artist Karla Sachse, who in 1999 created the installation at the former Inner-German border crossing Chaussee- / Ecke Liesenstraße. The rabbits tenaciously continued to dig their tunnels on and on,  brazenly ignored the border and its limitations.

120 brass rabbits once populated the Chauseestraße Border crossing – but like their real life counterparts, they are slowly vanishing.

The Berlin Wall once divided East and West Berlin here, creating a 120 Kilometer strip of no mans land. While it was off-limits to people – the Rabbits found it fair game, digging tunnels from west to east, east to west and merrily populating the green death belt of Berlin.

The Rabbits of the Berlin Wall lead a comfortable life, undisturbed and unaware of the political turmoil surrounding them. At least until the Wall came down. The Rabbits now had to find a new home and adjust to their new surroundings, as the wall that once meant death to the people was their safe haven. The rabbits quickly relocated into the Parks, Bushes and Gardens nearby” (www.digitalcosmonaut.com)

This site uses Akismet to reduce spam. Learn how your comment data is processed.

View all posts by thebluepolarbear

Experience The Finest Travel, Food and Lifestyle Stories Around The World

storytelling the world through travels & books

30 PLANET EARTH groups will be showcased in this blog

'the trip' - europe in a motorhome

Art at the push of a button

a cozy home for slow, simple and authentic living

The best longform stories on the web

Ecology is not a dirty word
Creator, Creature, Collards

MaritimeMac
One Chance to See the World

Learn How To Survive Any Disaster Situation